Posted by H. Hillman on January 4, 2013 in Peregrinations 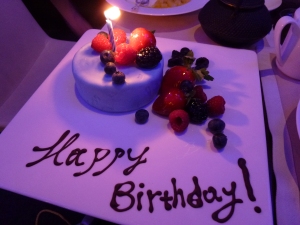 Today was a travel day.  Larissa escorted those of us who were to continue the Russian adventure (by heading down to Moscow) from the hotel to the train station.  We felt as if we were parting from a family member when at last she left us well settled on the train.  She herself said she needed to leave or she would start crying.

This train is a new, high-speed service between St. Petersburg and Moscow; rather than an all day or all night trip, one arrives in around 4 hours.

Our new guide, Anna (AH-nah) met us at the Moscow train station, where it was definitely colder than in St. Petersburg … no more marine benefit, maybe?  Anna introduced us to Moscow as we drove to our new hotel.  The city was founded mid 12th century.  The word “kremlin” means fort, and the first kremlin was founded on a hill above the city.  Kremlins were rebuilt as invasions and fires forced first defense then, in times of peace, expansion.  Due to this, the entire inner and historical center of Moscow is now a series of ring roads.

At the hotel we were greeted in traditional Russian fashion, with tiny glasses of vodka and an elaborate bread loaf with a small reservoir of salt in the center.  One breaks off a piece of bread, dips it in the salt and eats it to symbolize friendship.

The hotel itself is a marvel of technology and comfort.  One of my fellow travelers leaned over during our check in and whispered, “How did they let us in here?”  Yes, it’s that elegant and … well … fancy.  I arrived at my room and opened the door to be greeted with a touchpad rather than a light switch.  One taps the symbol in the center to turn on the lights.  There are also, as I eventually discovered, icons for housekeeping service and “Do not Disturb”, both of which turn on lights outside the door: red for “Do not Disturb” and yellow for “Housekeeping”.

Of course, one of the first things I managed to do was to break the curtains.  As it was dark, I wanted to close them.  I tugged on the left side and nothing happened.  I looked for that old fashioned string-and-pulley thing behind each side.  Nothing.  Okay, some hotels have those little rods one catches hold of and drags to close the curtains.  Nothing.  So I tugged on the right side.  The curtains jumped off the rod and started sagging.  Horrified, I was looking around for something to stand on so as to fix them when my doorbell (doorbell, yes, apparently this place doesn’t run to such plebian things as rapping one’s knuckles against the entry panel) sounded.  Another fancy amenity … bed turn-down service.  I pointed to the curtains and apologized.  The young woman went over to the control panel set into one of the drawers in the bedside stand (yes, there is one on each side of the bed, and it’s the same as by the entry door) and pushed a button.  The curtains began to close.  Well, okay, the left side began to close.  I apologized again, feeling very stupid.  She said something in Russian, went over and pulled the right side across and took her leave before I could further apologize.

Our dinner was at the hotel on the 12th floor.  I knew I’d better come clean about my faux pas, so as soon as one of our two amazing escorts came along I pulled her aside and explained.  Fortunately, she was a lot calmer about it than I, and promised to let me know if there were any damages filed.  Whew (I hope).

I had no desire to share the fact that it was my birthday.  Anne and McKenna knew, and also (being awesome people) had promised they wouldn’t make it public.  (In fact, Anne sneaked me a completely unexpected gift as we sat down, a wholly wonderful and necessary Stanford scarf with a darling card.)

The hotel, however, having discovered that fact from my passport during check-in, had different ideas.  No sooner had we been served dessert than the entire staff of the restaurant showed up with an exquisitely beautiful tiny cake (see photo at top).  They sang “Happy Birthday” in English, gave me a bag with a card and gift in it that turned out to be a stuffed version of the hotel logo, a lion (which we immediately christened “Carlton”) and then sang “Happy Birthday” in Russian.  I think I liked it better in Russian.

2 comments on “St. Petersburg to Moscow”